Also, Lakadamia, as occupying the totality of the Southern Easton continent, had no neighbours, even if Danskanksova is the neearest country by sea.

The country is divided into 24 Regions, which are also divided like this

Also, the territories are divided into 10 Economical districts. 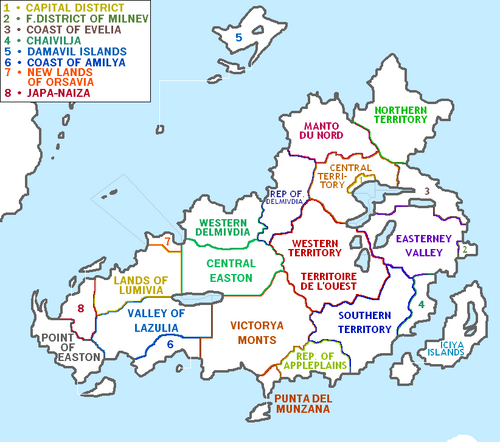 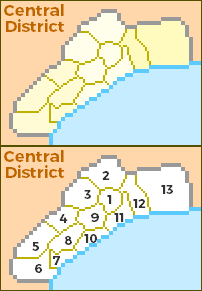 The capital district of the country is only composed of one city, Pavlodia, which is populated by a total of 2.341.482 inhabitants, divided into 13 boroughs. The capital is completely surrounded by the Central Territory and the Capitol Lake.

The flag of the central district is only composed of 2 colors, Yellow (a board & the crown) & White. The Yellow crown in the center means that it's the Capital. It's also one of the smallest "Regions" in Lakadamia, but not the least populated, which the Capital District is ranked 6th (out of 12 Regions) of inhabitants total, which is representing more than 7% of the total population in Lakadamia.
Retrieved from "https://fantasiacontest.fandom.com/wiki/Lakadamia?oldid=3303"
Community content is available under CC-BY-SA unless otherwise noted.